Like all my other SMF1 editions this one is not meant to be played in the story mode. 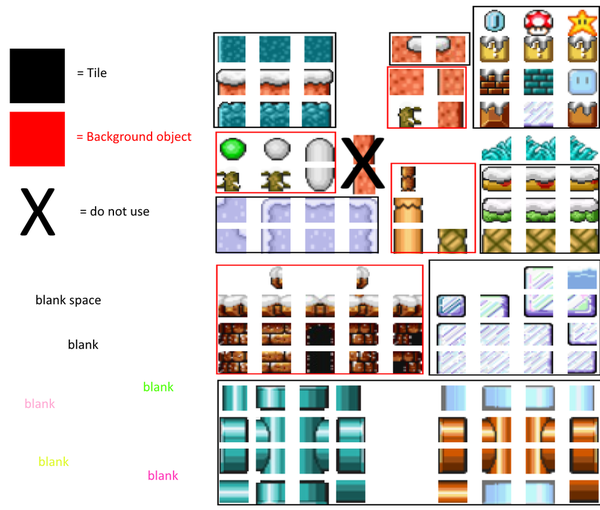 This is a tutorial about the edition so you know about the tiles , background objects etc.
This is SMB1 snow styled edition it is made for making SMB1 snow levels and christmas specials (too soon XD). Mario or Luigi now have the ice flower powerup and can shoot snowballs at enemies to defeat them. This SMF1 edition unlike the others (except SMB2F) is the only one one which has multiple themes, Snow , Cave , Castle  and SMW Grass. (All of them are edited to fit in the snow theme). Castle background has some bugs but I am not fixing it since SMF1 lacks background objects to replace. Some tiles seem to be blurred out I don't know how to fix this either (Ignore that the word "TYLES" is blurred out XD). The lacks "custom music" since normal one seems to fit. There are only three changes in music:
Music 4: Super Mario All Stars   SMB3 Castle Theme
Music 8: Super Mario 64 Snow Mountain
Music 11: Underground   New Super Mario Bros 2 OST

Here is a tutorial how to add Music 11 to the game ( Music 11 is Underground theme - New Super Mario Bros 2  )
You can download an example levels below.